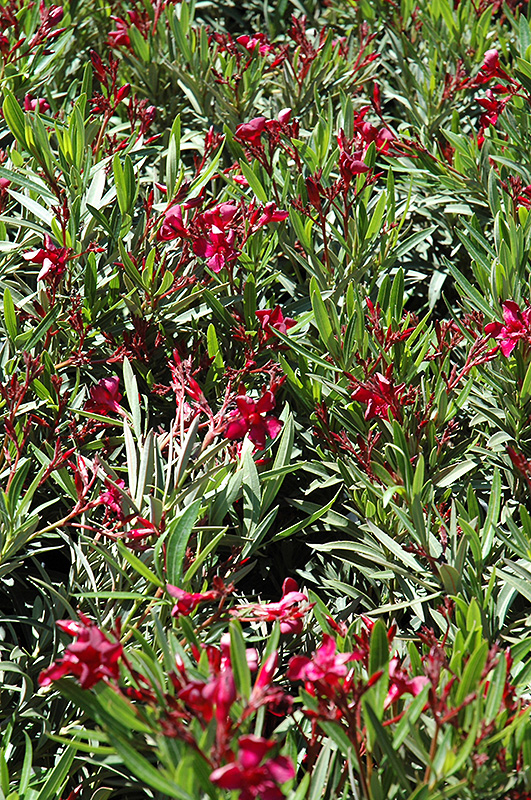 A smaller, dwarf variety producing volumes of red flowers in summer; great summer color for a smaller area; often used as a patio plant; pruning required to maintain strong structure; parts of this plant are known to be toxic

Dwarf Red Oleander features showy clusters of red star-shaped flowers at the ends of the branches from early to late summer. Its narrow leaves emerge green in spring, turning grayish green in color the rest of the year.

Dwarf Red Oleander is a multi-stemmed annual with an upright spreading habit of growth. Its relatively fine texture sets it apart from other garden plants with less refined foliage.

This is a high maintenance plant that will require regular care and upkeep, and can be pruned at anytime. Deer don't particularly care for this plant and will usually leave it alone in favor of tastier treats. Gardeners should be aware of the following characteristic(s) that may warrant special consideration;

Dwarf Red Oleander is recommended for the following landscape applications;

Dwarf Red Oleander will grow to be about 4 feet tall at maturity, with a spread of 4 feet. Although it's not a true annual, this fast-growing plant can be expected to behave as an annual in our climate if left outdoors over the winter, usually needing replacement the following year. As such, gardeners should take into consideration that it will perform differently than it would in its native habitat.

This plant does best in full sun to partial shade. It is very adaptable to both dry and moist locations, and should do just fine under typical garden conditions. It is considered to be drought-tolerant, and thus makes an ideal choice for a low-water garden or xeriscape application. It is not particular as to soil pH, but grows best in poor soils, and is able to handle environmental salt. It is highly tolerant of urban pollution and will even thrive in inner city environments. This is a selected variety of a species not originally from North America, and parts of it are known to be toxic to humans and animals, so care should be exercised in planting it around children and pets.